Three fixed variants of Nerve Hammer (as well as a customizable version) are playable in Hot Wheels: Track Attack

In 2013, the casting changed with a slightly different body design and an 'integrated' rear spoiler. The rear spoiler on all prior versions is a separate plastic piece. The tooling was changed again in 2016, with the front window piece being slightly modified: the place for the rivet post is moved to the body from the window piece.

The Nerve Hammer has been released in the following versions: 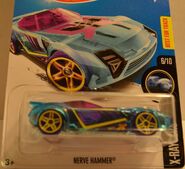