The Night Burner (originally named Mega Thrust) debuted in the 2006 First Editions Series. The name was changed in 2008 to Night Burner. The Night Burner has a special feature: when the exhaust pipe is blown into, the turbine spins and makes a kazoo/whistle type sound. A similar feature is found in Whip Creamer II, although it is less profound there. In 2009, there was a minor casting change to the base where the embossed Hot Wheels insignia was removed - See picture in Gallery. The casting was changed again in 2017, where the front grill was made part of the base.

The Night Burner has been released in the following 1/64 scale versions:

Born: 2006
Birthplace: El Segundo, California, USA
Designer: Hot Wheels®
Specialty: This vehicle's massive turbine engine spins as you blow into it. Give it a whirl to hear the high-pitched scream; sure to scare the competition away! 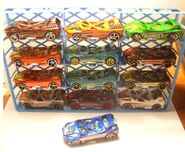 Nightburner is playable in Track Attack 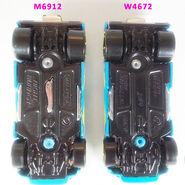