The Nissan 350Z, known as the Fairlady Z in Japan and internally designated the Z33, is a two-seat sports car manufactured Nissan from 2002 to 2009. Designed by Ajay Panchal, Diane Allen and Mamoru Aoki, the car's roots can be traced back to the 240Z Concept from 1998, which was slated to be put into production but was canceled due to lukewarm reception. Replacing the 300ZX, the 350Z was launched in Japan at Nissan Blue Stage dealerships in July 2002 and in the United States the following month, both as a 2002 model, in base, Enthusiast, Performance, Touring and Track trims. Production ended in 2009, when the car was replaced by the 370Z.

This casting features a Top Secret Super G-Force widebody kit and the associated rear wing. This wing was initially made of plastic but due to cost-cutting was changed to metal in 2013 and cast into the body. As this casting is right-hand drive the casting technically replicates a Fairlady Z.

The Nissan 350Z has come out in the following versions:

Fun Facts!
Mattel released a stock version of the Nissan Z® as a 2002 First Editions™ model. 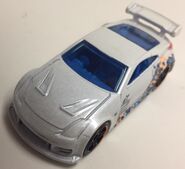