The Olds 442 is a Hot Wheels casting designed by Larry Wood which debuted in the 1971 Hot Wheels range of vehicles, based on the 1970 Oldsmobile 442. It is undoubtedly the rarest overall casting of all cars from the Redline era (1968-1977). It is highly sought after and even cars in poor condition are somewhat valuable.

It was manufactured in 1971 and was produced at the Hong Kong factory. It features an opening hood which displays a detailed motor. The glass varies from being completely clear, to having a slight light blue tint. It was packaged with a decal sheet of white stripes with stars which was to be applied by the owner, it also came with either a metal or plastic 'Collectors Button'.

All production versions came with a white interior. Some Spectraflame Red cars have been found with a black interior and it is unknown whether they were a pre-production prototype or a very short run early in production.

It was painted in a variety of Spectraflame colors. While all original Olds 442 are hard to find, no matter the color, Purple is the rarest and is the rarest of all Hot Wheels from the Redline Era (excluding prototypes).

In 1973, the Olds 442 was given a light dome in the roof and renamed the Police Cruiser. Similar versions with lights on the roof were released under the names Chief's Special, Maxi Taxi and Staff Car over the next few years.

The Olds 442 was re-tooled in 2004 for the HotWheelsCollectors.com Series 3 Real Riders.

Several castings have been made based on various Oldsmobile 442 models, please see the Olds 442 page to see them all. 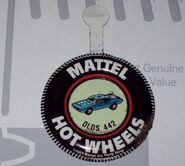