Issued in 1973 as the Police Cruiser. It never had the name Olds or 442 in the name; it is just what some collectors added over the years. Although it is a modified casting of the Olds 442.Originally issued with a hood that opened and red light in 1973.1973 stands alone in the Hot Wheel world, as for all cars lost the Candy/Spectraflame paint to adopt a new safer and cheaper paint Enamel. Also there were no Tampo's applied. There was the appeareance of Metalflake paint but that was only in the Shell Promotional give away.

The Police Cruiser has come out in the following 1/64 scale versions: 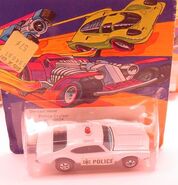 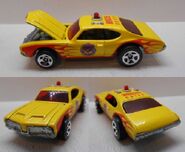