The Pagani Huayra (Italian pronunciation: [ˈwai̯ra] or [wai-rah]) is an Italian mid-engined sports car produced by Pagani. Succeeding the company's previous offering, the Zonda, it costs €1,198,000 ($1,314,000). It is named after Huayra-tata, a Quechua wind god. The Huayra was named "The Hypercar of the Year 2012" by Top Gear magazine. On February 11, 2015 it was reported that the Pagani Huayra has been sold out. The Huayra was limited to just 100 units as part of Pagani's agreement with engine supplier Mercedes-AMG

The Pagani Huayra has come out in the following 1/64 scale versions:

Born: 2011
Birthplace: San Cesario sul Panaro (Modena)
Designer: Pagani
Specialty: This Italian mid-engine "hypercar" boasts 730-hp, and top speeds in excess of 230 mph. It's name means "god of the winds", and there's no doubt in our minds why. 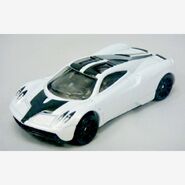 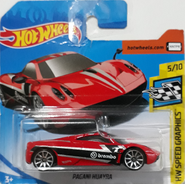 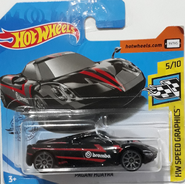