Pharodox is a car designed to look Ancient Egyptian. It has a very smooth hood, and a triangular grille. It has a headlight on either side of the grille. Pharodox has a cockpit shaped like an Ancient Egyptian beard. On the base of the Pharodox, there is a movable piece that will spin over to reveal a hieroglyphic of the Hot Wheels logo; in 2015, the tooling was changed and the rotating part was removed. The tooling was changed again in 2017, with the glass canopy being shifted forward so it no longer covers the seats.

The Pharadox has been released in the following 1/64 scale versions:

The rotating bottom piece as shown on the Pharodox from the Wall Tracks 5-Pack. It has the Hot Wheels logo on it.

The updated base of the Pharodox, no longer featuring the rotating part. 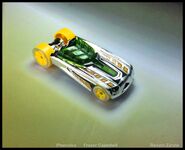 Add a photo to this gallery
Retrieved from "https://hotwheels.fandom.com/wiki/Pharodox?oldid=327953"
Community content is available under CC-BY-SA unless otherwise noted.