Although Mattel aquired Corgi in 1989, models never mixed until 1996 when there were several corgi casting found in the Hot Wheels line-up. This was quite short lived though. Although similar in appearence to P-911, this model is a former Corgi casting, and they are in fact 2 different cars. This is also known as Porsche 911 Carrera. The Casting portrays the 1973 RS version of the European-market Porsche 911 (Called the Carrera in European markets) and was first released by corgi around 1973-1974. Under Corgi this casting was known on the base as 'Porsche Carrera' and 'Porsche 911 Turbo' on some packages from the 1980s despite actually being released in 1973, 2 years before the Turbo Model of the Porsche Carrera was launched.

The Porsche Carrera has come out in the following versions: 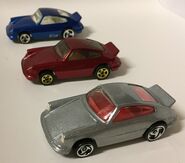 Retrieved from "https://hotwheels.fandom.com/wiki/Porsche_911_Carrera?oldid=339125"
Community content is available under CC-BY-SA unless otherwise noted.