The Porsche 911 GT3 is a High-Performance variation of the Porsche 911 that Porsche debuted the Porsche 911 GT3 RS at the Geneva Motor Show in 2015. Fitted with Turbo-styled intakes, in lieu of the intake below the rear wing. The roof is made from magnesium to reduce weight. The interior includes full bucket seats, carbon-fibre inserts, and the Club Sport Package as standard (a bolted-on roll cage behind the front seats). The RS's 4.0-litre unit with 500 hp (373 kW) replaces the previous 3.8-litre engine. Race time on the Nürburgring track is a mere 7 minutes and 20 seconds. 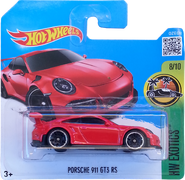