History on the Porsche 917Edit

This is a model of the very first design of Porsche 917, produced in March, 1969, and raced through the 1969 season. The actual Porsche 917 was created with the goal of gaining an overall victory at the 24 Hours of Le Mans in mind. Design work started in July of 1968, planning to have the required 25 cars ready to be tested the following spring. The car had a 4.5 liter (274.6 cu. in) air cooled flat-12 engine, with dual overhead cams and twin spark plugs. It was initially rated at 620 hp.

Unfortunately the car had a maximum speed of around 240 mph. Little was understood of race car aerodynamics when traveling at those speeds in 1969, and the design you see in the Hot Wheels model was actually producing lift at over 200 mph, causing the car to be extremely unstable. A British driver was killed in a privately owned 917 at Le Mans that year, when he lost control on the high speed Mulsanne Strait. The 917s were not competitive at Le Mans, and only won one race in that year's sports car series.

After the 1969 season, at a testing session in Austria, an engineer noticed that the car had gone though a cloud of gnats, with many of the insects striking the front of the car. But there was no sign of the bugs on the tail of the car, suggesting that the tail was in a partial vacuum. The engineer and some mechanics improvised a higher tail with sheet aluminum, and sent the car back out on the track. The test driver reported the car slightly slower in a straight line, but much faster and more stable in the corners, and the laps times were several seconds faster. The car was sent back to the Porsche factory, where a new high speed wind tunnel tested the differences between the original design (this Hot Wheels model) and the improvised tail. Over the next few months several changes in the aerodynamics were made.

As a result, the Porsche 917 dominated the World Sports Car Championship over the next two years, including back to back wins at Le Mans. When the 1972 regulations outlawed the big engines, Porsche added turbochargers to the flat-12 engine (now developing over 1,000 hp) and entered the North American Can-Am series. The 917 dominated that series before the 1973-74 oil crisis caused that series to collapse. To this day the 917 is still regarded as one of Porsche's greatest cars.

Mattel modeled the car after the Porsche 917, it had an opening rear engine compartment, Capped redline wheels and a sticker sheet with the number "18" racing decal and rocker panel stripes with the word "Porsche". The Porsche 917 was introduced into the line-up in 1970. This Porsche 917 casting has seen plenty of action through out the years. It was reissued in the line-up in 1973 with the new child safe paints and was part of the Flying Colors years to be laid to rest in 1979. Mattel in the 2000's started bringing back many of the old castings by reproducing the casting, this casting was one of them (see below for the retooled version).

The Porsche 917 has come out in the following 1/64 scale USA versions:

The Porsche 917 has come out in the following 1/64 scale Hong Kong versions:

1973 Porsche 917 Enamel reissue 1973 issued cars are a stand alone year. Gone were the spectraflame paints. 1973 models were issued in only Enamel paints. 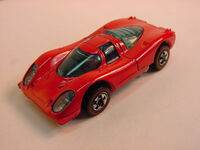 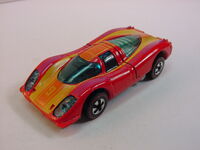 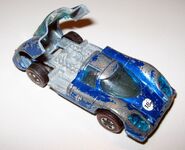 Retrieved from "https://hotwheels.fandom.com/wiki/Porsche_917?oldid=343454"
Community content is available under CC-BY-SA unless otherwise noted.