The Porsche 917K debuted in the collector-aimed 100% line in the Porsche 50th Anniversary 4-Car Set . It featured an opening rear hatch which displayed a detailed engine. In 2005, it was re-tooled without the opening rear hatch. It was one of the two 100% Hot Wheels castings to stay in production after the series ended.

The Porsche 917K has come out in the following versions:

The Porsche 917K has come out in the following versions: 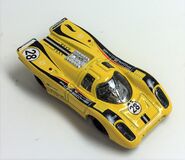 Add a photo to this gallery
Retrieved from "https://hotwheels.fandom.com/wiki/Porsche_917K?oldid=277479"
Community content is available under CC-BY-SA unless otherwise noted.