The Porsche 917 LH was the second new model version made in cooperation with the 2017 racing game Project CARS 2, developed by Slightly Mad Studios and published by Bandai Namco Entertainment.

The first release of the Hot Wheels 917 LH is a replica of the car driven by Pedro Rodriguez and Jackie Oliver (Chassis: 917-043) at the 1971 Le Mans 24 Hours, despite having the fastest qualifying time and setting a new lap record, they did not complete the race. The car still exists and has been restored to its livery from the previous year (1970), it is on display at the Simeone Foundation Auto Museum.

Porsche 917 LH has been released in the following 1/64 scale versions:

Porsche 917 LH Back Side View 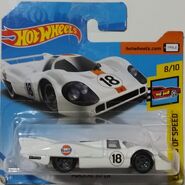 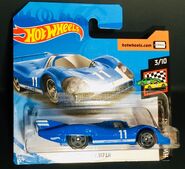 Retrieved from "https://hotwheels.fandom.com/wiki/Porsche_917_LH?oldid=329902"
Community content is available under CC-BY-SA unless otherwise noted.