This version of the Porsche 918 Spyder is based on the 2014-2015 production version of the car, rather than the concept version like the one from 2013.

Porsche 918 Spyder has come out in the following 1/64 scale versions:

Born: 2015 Zuffenhausen, Germany
Designer: Porsche
Plug in, rev up, and race off! This ultra-futuristic hybrid supercar eclipse the competition with its eye-grabbing design and adrenaline-pumping performance. The technology advanced 4.6-litre, V–8 engine cranks up the intensity and output to a whopping 887 hp for top speed of 210 mph! 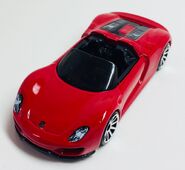 Add a photo to this gallery
Retrieved from "https://hotwheels.fandom.com/wiki/Porsche_918_Spyder_(2018)?oldid=330009"
Community content is available under CC-BY-SA unless otherwise noted.