The Porsche 934.5 is a rare and unusual variant of the conventional Porsche 934 intended to bridge the gap between Porsche's 934 and 935 Race cars. Where the '4' in 934 is a reference to the racing group it was designed for: Group 4 (this naming feature is also seen on the 935).

Born: 1977
Birthplace: Stuttgart, Germany
Designer: Porsche®
Specialty: With it's exaggerated body work, slant-nosed front and massive rear wing, the Porsche 934.5 maybe considered an odd looking machine, but this machine was built purely to dominate the track. With only 10 ever made, this rare gem with its 3.0-litre, 590 hp turbo engine has consistently crushed the competition and is now a highly coveted jewel in the collector world. 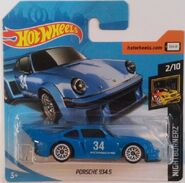 Porsche 934-5 (B) Factory F 4 - 17 Cx
Add a photo to this gallery
Retrieved from "https://hotwheels.fandom.com/wiki/Porsche_934.5?oldid=334950"
Community content is available under CC-BY-SA unless otherwise noted.