The Porsche 911 GT2 was a high performance sports car built by the German manufacturer Porsche from 1993 to 2012. It was based on the 911 Turbo, and uses a similar twin-turbocharged engine, but features numerous upgrades, including engine upgrades, larger brakes, and stiffer suspension calibration. The GT2 is significantly lighter than the Turbo due to its use of rear-wheel drive instead of all-wheel drive, and the lightening or removal of interior components. As a result, the GT2 was the most expensive and had the highest trim level within the 911 lineup.

The Porsche 993 GT2 has come out in the following 1/64 scale versions:

Porsche 993 side view courtesy of hotwheels-photography.com. 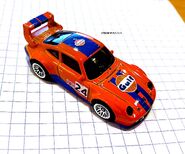 Super Treasure Hunt 993 GT2 Fullcage
Add a photo to this gallery
Retrieved from "https://hotwheels.fandom.com/wiki/Porsche_993_GT2?oldid=362707"
Community content is available under CC-BY-SA unless otherwise noted.