In the Accleracers series, this car was driven by the Teku's Vert Wheeler, until it was destroyed in the Water Realm. Power Rage has HID headlamps,and LED rear lights. The car has a carbon fiber body on coilovers and a aluminum chassis. Like most Teku cars, it has scissor doors and underglow neon. There are 2 speakers, 2 tweeters,and 3 subwoofers, 3 gauges on the passenger side which show boost, NO2, and fuel levels. The tachometer and speedometer are mounted on the driver's side. Power Rage is powered by a turbocharged 2.8 liter 4 cylinder with an intercooler generating 410 HP. The exhaust pipes exit out the side. The top grille creates a vaccum for the hood intercooler outlet. There are also front and rear brake outlets for the 6-piston all carbon fiber antilock brakes. A stylish angled spoiler provides downforce. There is also an equalizer for the stereo. This car tops at 280 mph and goes from 0-60mph in 3.3 seconds. There are interior neon short shifters and bucket seats.

This was one of Eric Tscherne's last designs before he left Mattel. The car's tooling was updated in 2016, where the spoiler is now part of the body and is no longer a separate piece.

From the Acceleracers series: After half of Vert's Deora II was destroyed in the Storm Realm, it was replaced by Power Rage. He took it into the Swamp Realm and barely made it out. It was later taken into the Lava Realm and Water Realm. In the Lava Realm, the tires were overheating, as the cars did not have treads for the tires, at the time. After Monkey took a tire from a Drones car, the tires for the cars were transformed to ATD. However, when Vert reached the Water Realm, he tried to go for the fastest time and didn't watch the oversteer. As a result, he had to use the newly-installed EDR and Power Rage was destroyed.

The Power Rage has been released in the following 1/64 scale versions:

Vert Wheeler and his Power Rage 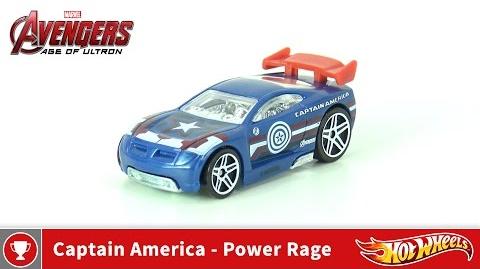