Power Surge is a Hot Wheels original model that's powered by an electrical motor. The front and rear bumpers are made from large coils and on the underside is a large circular coil for wireless charging (through induction). On the back of the car, just above the engine are giant cooling fins situated to prevent the coils and electric motor from overheating.

Power Surge has been released in the following 1/64 scale versions: 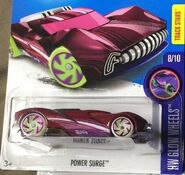