Kellogg Company teamied up with Mattel and NASCAR to offer buyers of selected Kellogg's cereals the opportunity to send away for a free NASCAR Hot Wheels Pull 'N Go mini-car. This marks the first time Mattel has offered the mini-cars in the United States. More than 37 million boxes of Kellogg's cereal will feature a mail-in offer for the 11 different mini-cars. Ten cars display the cereal brand logo and one car is a replica of the official #5 Kellogg's Chevrolet driven by two-time NASCAR champion Terry Labonte. A Pull 'N Go car is operated by rolling it backward to coil an internal spring. When the car is released, the spring uncoils to move the car forward.

The Kellogg's Pull 'N Go Monte Carlo was released In the following versions: 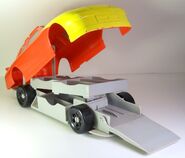 Retrieved from "https://hotwheels.fandom.com/wiki/Pull_%27n_go?oldid=209431"
Community content is available under CC-BY-SA unless otherwise noted.