The Python was one of the cars released in the original 1968 Hot Wheels series. It was based on the "Dream Car" show car built by Bill Cushenbery. It was originally advertised as the "Cheetah" in Mattel's advertisements for the "New California Custom styled Hot Wheels," (seen in an original magazine advertisement from 1968.) The 'Original 16' Python Cars were packaged with a metal 'Collector's Button'.

The The Python has come out in the following 1/64 scale versions:

Preface
The Python® is one of the original 16 Hot Wheels die-cast models Mattel deliberated on and eventually released in the spring of 1968*. This dissertation will focus on the chronological aspects of the Python® and reflect on each and every change that occurred from its inception.

*The date May 7th, 1968 is the official date derived when the subject matter was researched, “When were Hot Wheels® released to retailers”. Furthermore this is mentioned, documented and discussed in several Mattel publications.
This Python® die-cast model actually began its' existence at Mattel as the Hot Wheels® "Cheetah™"! However, this name regrettably was not intended to be and was on no account officially released to the general public. **Nevertheless, there is one diminutive exception to this decree! There were a few prototypes which managed to escape the destruction process from both production facilities and hence the artifacts exist to this day. These Cheetahs™ are considered extremely rare and desirable to collect. 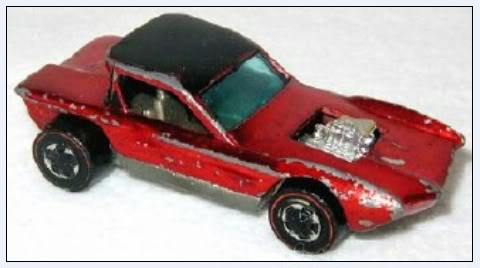 Image is courtesy of Bruce Pascal
**So what is the one Cheetah exception you ask? Well, I’m sure you will find this hard to believe but it is factually stated in Bruce Pascal’s reference book, “Hot Wheels Prototypes” on page 84.

There exists a red Cheetah™ prototype in which Bruce Pascal acquired with plenty of edge wear as shown in the example above. This was initially acquired by someone who sent away for a cereal company endorsement in 1968. Mattel was engaging in these types of mail in promotions frequently in an effort to sponsor their toy lines. In this particular case, the Hot Wheels® promotion Mattel was sponsoring somehow provided the customer with this mint prototype red Cheetah™ Hot Wheels® car! What an unbelievable choice toy car this came to be! Obviously the Cheetah™ was well loved judging by the edge wear it acquired through the years. By the way, this is the only Cheetah™ to date adorning the long tail pipes. This makes it even more desirable!

The car before it was modified into a python 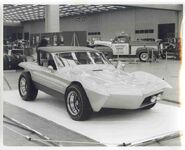 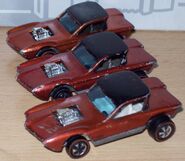 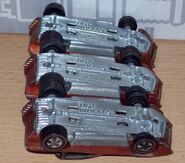 3 orange Python, all with LongTailPipes

Python Badge with and without hook
Community content is available under CC-BY-SA unless otherwise noted.
Advertisement