Numerous castings were produced before the line was discontinued in 1973. RRRumblers are noted to be extremely expensive to acquire today.

This series is not to be confused with the later Rumblers series from 2007 featuring cars with lights and sounds.

These Hot Wheels vehicles have come out in the following 1/32 scale versions: 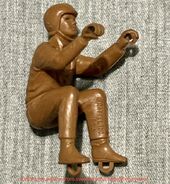