The Ferrari 308 GTB was a mid-engined two-seat sports car manufactured by Ferrari from 1975 to 1985, replacing the Dino 246 as their new entry-level model. The car was further refined as the GTBi and the GTB Quattrovalvole in 1980 and 1982 respectively. The car was succeeded by the 328 GTB in 1985.

This casting has been variously named the Race Bait 308 and Racebait 308; in later years this casting was named the Ferrari 308 or Ferrari 308 GTB. This casting originally had a plastic base before it was changed to metal in 1982. The casting was modified for use in the Power Command Racers series in 1990, now with a different plastic body, clockwork motor and a large wing. Said Power Command casting was later modified for use in the regular lineup, although this was short-lived.

The Racebait 308 has come out in the following versions: 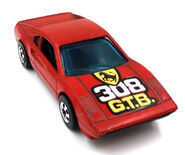 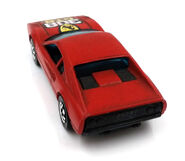