This casting was introduced and known as "Bad Ratitude" from 2013 to 2015. In the 2016 Street Beast Mini Collection, the name was changed to "Ratical Racer".

The Bad Ratitude has been released in the following 1/64 scale versions:

Born: 2013
Birthplace: El Segundo, CA USA
Designer: Hot Wheels®
Specialty: This lil' fat rat rod comes with 10 cylinders of serious cheese to stand up any cat who decides to cross its path! Catch it if you can!

Variation of the 2016 version's card; the card uses the older name "Bad Ratitude" instead of "Ratical Racer".

Both name variants of DHR95 were released in the M case 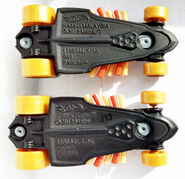 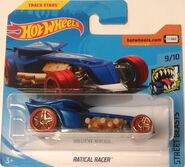