The story behind the Red Baron is complex - in 1968 (possibly due to the popularity of the "Peanuts" cartoon character Snoopy's imaginary battles with the Red Baron) Monogram introduced a model kit of a stylized hot-rod incorporating a WWI German infantry helmet (Pickelhaube) and an Iron Cross motif on the radiator. In 1969, Chuck Miller built a working life-size version of the car, and the Hot Wheels casting appeared in 1970. Interestingly, although the Hot Wheels version has fenders (UK: mudguards), neither the Monogram kit nor Miller's car has them.

For a short time, Mattel owned Monogram, and the Hot Wheels Red Baron was included as a bonus in some model kit boxes.

The Hot Wheels version debuted in 1970 and is one of the most popular and memorable Hot Wheels ever released. It was even featured in the Toy Story movie among many other famous toys.

The original version featured 'Capped' Redline wheels, 'Spectraflame' red paint and a pointed spike on the helmet and was packaged with either a metal or rarer plastic 'Collectors Button'.

In 1973, the Red Baron was released again, but this time the Spectraflame' paint was replaced with flat enamel paint and the front wheels were changed to the newer 'Hole-Through' style Redline. The rear wheels stayed the 'Capped' style Redline wheels and the pointed helmet spike remained.

In 1974, the Red Baron was released again, similar to the 1973 version except due to safety concerns the pointed spike was dulled to a small bump. These were found with the Capped/Hole-Through combination of wheels from the 1973 version, but more commonly with all four Hole-Through wheels.

The Red Baron was produced with Blackwall wheels in the 1977 Flying Colors Series, 1979 Classy Customs Series and the 1983 Mainline series. All these versions are identical except for the card.

In 1993, The Red Baron was re-tooled for the 25th Anniversary Series and has been used many times until 2012.

In 2002 a more detailed and accurate version of the Red Baron was made for the collector-aimed 100% Hot Wheels series and was used in the Psychedelic Relics 2-Car set. This version is much smaller than the original version and does not include fenders over the wheels. It was only used once before the 100% castings were discontinued. 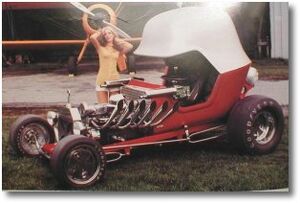