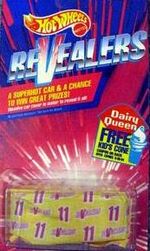 The Revealers from 1993 were a series of cars with a lottery type of game included. They were the original Mystery cars.

The cars were sold in different clear blister packs, but they were wrapped inside a yellow opaque paper baggie. The baggie was intended to be dissolved in water, but it was easier and less messy to just tear them open.

The main purpose of them being packaged this way was because there were a limited number of cars packaged with a plastic Hot Wheels Logo token to be sent in to Mattel for a prize. If you found one with a Blue Logo, then you would send it to Mattel to receive a special 10-Pack of Hot Wheels. If you found a Gold Hot Wheels Logo then that was good for a boys 22" Bicycle Decorated in Hot Wheels Team Blue with logos and a Gold Plated Lamborghini Countach(see below)

There were twelve different castings each released in three different paint colors. They were all made in Malaysia.

All cars have white "REVEALERS" on windshield.

This was Grand-1st prize for revealers Gold token. Less than 1000 Gold tokens total were ever issued

Retrieved from "https://hotwheels.fandom.com/wiki/Revealers?oldid=144625"
Community content is available under CC-BY-SA unless otherwise noted.