The Rocket Box is a Hot Wheels casting designed by Jun Imai. The First Edition version came out with many variations ranging from tampos, the number used on the side, paint finishes, and base colors. It is one of the smallest Hot Wheels cars. It is almost the same size as Hyper Mite.

The tooling for the car was modified in 2017 while the car was in the HW Art Cars segment, the rear panel doesn't have the window part anymore, and the base is now completely plastic..

The Rocket Box has come out in the following 1/64 scale versions: 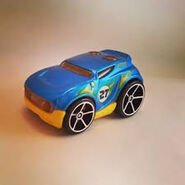 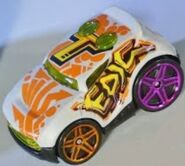 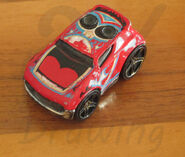 2019 Multipack
Add a photo to this gallery
Retrieved from "https://hotwheels.fandom.com/wiki/Rocket_Box?oldid=337385"
Community content is available under CC-BY-SA unless otherwise noted.