The Rogue Hog is an original Hot Wheels based on a futuristic police car, debuting in the 2007 New Models. It resembles Hollowback, although more sporty and slender. It is the mainline version of the McDonalds Thunderblade. It was originally planned for a none-produced Acceleracers toyline, where it would transform into a roller-blading mech, has seen here . The Rogue Hog was retooled in 2015; the casting's front vent is now integrated with the body.

The Rogue Hog has been released in the following 1/64 scale versions:


The Rogue Hog™ is the first police car with a light bar to be introduced into our mainline since the early '90s! 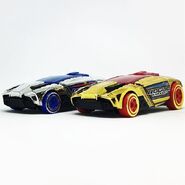 Add a photo to this gallery
Retrieved from "https://hotwheels.fandom.com/wiki/Rogue_Hog?oldid=394520"
Community content is available under CC-BY-SA unless otherwise noted.