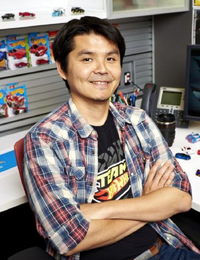 Ryu Asada was a Japanese Hot Wheels designer who worked at Mattel from 2004 to 2021 and oversaw the design of cars in the basic $1 mainline lineup as a Designer Project Lead, taking over from Jun Imai. Born in Osaka, he pursued a degree at the Art Center College of Design after emigrating to the United States. After graduating, he initially began work as a designer for Matchbox from 2004 to 2012; he first designed for Hot Wheels in 2009 as a "guest designer", and would join the Hot Wheels design team three years later.

He passed away on 23 March 2021 at the age of 42 from cancer. A mini-segment of the 2022 mainline, dubbed Ryu's Rides, as well as the Ryu Asada Award for the 2021 Hot Wheels Legends Tour, were both created to celebrate his life and to honor his legacy.