The S'Cool Bus is a Hot Wheels casting which debuted in the 1971 Heavyweights series. It is based on the popular Monogram model kit designed by Tom Daniel. It is a dual-engined funny car with an opening body of an American yellow school bus.

The original 1971 was manufactured in Hong Kong and only produced in one color; Enamel Yellow, just like the Monogram model. Underneath its opening body, it featured an orange engine scoop and a black roll-cage, both of which can often be found missing and have been reproduced. It was packaged with a plastic 'Collectors Button' and sheet of stickers to be applied by the owner.

It can be found with or without "Heavyweights" on the base, and some collectors believe cars without it are pre-production.

The S'Cool Bus is known to have issues with a metal fatigue called 'Crumbling' where the body or chassis develops cracks and literally crumbles into pieces.

In 1994, it was re-tooled for the Vintage Series II and has seen several releases since.

The S'Cool Bus has come out in the following 1/64 scale versions: 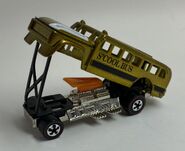 Add a photo to this gallery
Retrieved from "https://hotwheels.fandom.com/wiki/S%27Cool_Bus?oldid=366108"
Community content is available under CC-BY-SA unless otherwise noted.