The Saber is Vert Wheeler's main vehicle in the TV Series "Hot Wheels: Battle Force 5". In the show, the car originally was a red-colored Power Rage but it was turned into the Saber by a Blue Sentient, "Sage" and a sentient chip after it was damaged by an attack from Captain Kalus’ Fangore. Saber's main way of attacking in the series was from the front folding open into dangerous saw blades. This is mirrored by certain versions of this model.

The Saber has come out in the following 1/64 scale versions:

Saber as it appeared in Battle Force 5

Saber with 1 of its attachments

Saber with 1 of its attachments 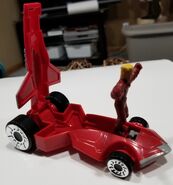 Add a photo to this gallery
Retrieved from "https://hotwheels.fandom.com/wiki/Saber?oldid=388193"
Community content is available under CC-BY-SA unless otherwise noted.