The Sharkruiser is an original Hot Wheels design debuting in the 1987 "Speed Demons" series, which consisted mostly of grotesque hot-rods styled after real or mythical animals (something akin to Transformers during that time). The upper body fairly accurately reproduces the upper jaw, body (minus the tail) and dorsal/pectoral fins of a Great White shark. The interior molding continues from front to back to form the fish's huge teeth and the car's two massive V8 engines and tail-pipes. The car's base extends to form the shark's lower jaw at the front and the tail at the rear. This unusual design means that certain versions actually have a tail and lower jaw that are a different color from the rest of the body. Unrealistically, the tail fin is horizontal, like that of a dolphin, rather than vertical like that of a real shark! (This is due to the way the car is designed. The engine placement would not allow the tail to be vertical.)

It reads SHARK in all-caps on the headers of the engine block.

There is also a motorized pool toy made by Mattel (under the Maxx Steel name) called the "Sharkruiser".

The Sharkruiser has been released in the following 1/64 scale versions: 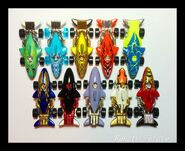 Add a photo to this gallery
Retrieved from "https://hotwheels.fandom.com/wiki/Sharkruiser?oldid=332419"
Community content is available under CC-BY-SA unless otherwise noted.