By Turbo, it is not the Turbo you stick on the exhaust, to make forced induction. It is a Turbine engine. From Wikipedia STP-Paxton Turbocar

The STP-Paxton Turbocar was a racing car, designed by Ken Wallis as the STP entry in the Indianapolis 500.

Wallis, a distant relative of famed British engineer Barnes Wallis, had developed a workable plan for harnessing a gas turbine to a race car. He first presented the idea to Dan Gurney, who passed on the idea. Wallis then offered the plan to Carroll Shelby and Shelby said (according to later court testimony), "Hogwash." Finally, Andy Granatelli of STP expressed interest in the concept. Wallis and his crew moved in with Andy's brother Joe at STP's Paxton division in Santa Monica, and they began work on the turbocar in January 1966. It was Granatelli who introduced a side-by-side concept—that is, putting the engine at the driver's left. Granatelli also added four-wheel drive to the design.

So why did Mattel use the term "Shelby"? Why not "STP" or "Granatelli".

Ken Wallis designed and built the STP Paxton turbocar for Granatelli. It was not ready in time for the 66 Indy 500. In 67 it retired from the lead with 3 laps to go. In 68 it crashed in practice & never raced again. Meanwhile Wallis went on to design a similar car for Carrol Shelby who entered 2 cars for the 68 Indy 500 for Denny Hulme & Bruce McLaren but these were withdrawn "for safety" following Mike Spence's fatal crash while practicing in a Lotus 56 Turbocar. (The real reason was they actually did not comply with the 68 Indy regulations...)

Interesting that this type of engine would go on and power many other things, M1 Abrams.

Shelby Turbine was a car from the 1969 Hot Wheels series.

The Cars were packaged with a metal 'Collector's Button'.

The Shelby Turbine has come out in the following versions: 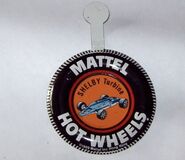