The Since '68 series was released from late 2007 through 2008 to commemorate the fortieth anniversary of Hot Wheels. New models were introduced, including the Purple Passion Woody, the '64 Dodge 330 and the Custom Ford Mustang Convertible.

The series included four segments of individually packaged vehicles: Top 40, Muscle Cars (10), Hot Rods (10) and Originals (10). Packaged sets included the Collector Top 40 set (not to be confused with the 40 Years of Hot Wheels set) and four 4-car sets in commemorative tins: two Muscle Cars sets and one set each of Hot Rods and Originals. 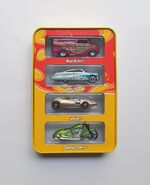 Since '68: Originals 4-Car Tin Set / By @uno64zoom Instagram
Add a photo to this gallery

Retrieved from "https://hotwheels.fandom.com/wiki/Since_%2768_Series?oldid=389888"
Community content is available under CC-BY-SA unless otherwise noted.