Sling Shot got its name because when viewed in bird's eye view the back of the car looks like a slingshot, the car has a carbon-fiber monocoque with double wishbone suspension and aluminum chassis the body has an angled appearance.

In 2014, the casting was retooled to have the fins at the back connected, with a rivet post moved to under the fins. The base was also changed from metal to plastic.

Sling Shot has been released in the following 1/64 scale versions:

Born: 2001
Birthplace: El Segundo, CA, USA
Designer: Hot Wheels
Specialty: Built with aerodynamic lines and a 12-cylinder engine, this lightweight car will shoot past every sap at the speedway.

A picture in the gallery that details a cheat code for how to unlock the ZED 36 version of this car and the Smash Mouth version of Super Tuned in the PlayStation 2 version of the Hot Wheels World Race game. 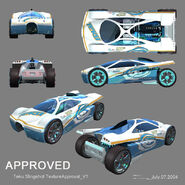 Looks like the ride of ZED 36 instead of Batman