The Snake  was issued in the 1970 Hot Wheels line-up. Race car driver Don "Snake" Prudhomme's car was a 1970 Plymouth Barracuda Funny Car. He is most famous for racing Tom McEwen in his red 1970 Plymouth Duster, named Mongoose. The Snake had its own style of blister for this release. The Blister has a picture of both "Mongoose & Snake" cars. "Mongoose vs Snake" written just above the car on the cardboard. It included a metal button and was released both as a Hong Kong version and an USA version. It had standard capped Redlines on the front and the back. 1970 was the only year of release for this casting with this name.

This car is playable in Hot Wheels: Turbo Racing.

The Snake has come out in the following 1/64 scale versions: 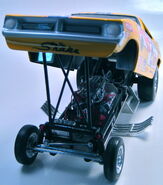 Seen better days...
Add a photo to this gallery
Retrieved from "https://hotwheels.fandom.com/wiki/Snake?oldid=317254"
Community content is available under CC-BY-SA unless otherwise noted.