The Snake was released in both enamel white and yellow, with pre applied blue 'Snake II' stickers (even on the yellow release which should have had white 'Snake' stickers). Due to cost cutting, the 1973 Snake II did not come with windows or a body prop and also did not come on a unique 'Snake and Mongoo$e' card, but instead came on the ordinary 1973 card. The 1973 Snake II came with capped wheels on the rear and a straight axle on the front. It also came with '6969' cast on the underside of the roof. The 1973 castings of the Snake and Mongoo$e are hard to find and highly sought-after, personal judgement should be taken when purchasing one to determine its legitimacy. 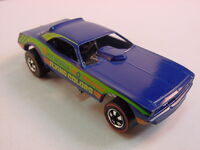 Retrieved from "https://hotwheels.fandom.com/wiki/Snake_II_(1973)?oldid=302630"
Community content is available under CC-BY-SA unless otherwise noted.