So Fine is a Hot Wheels casting that was designed by Gary Saffer based on a 1951 Buick Roadmaster ("TM GM" is stamped on the base). The So Fine debuted as part of the 2000 First Editions.

So Fine has been released in the following versions:

So Fine side view 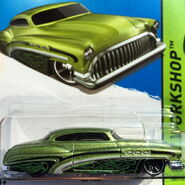