Sojourner is an early version of a Mars rover which landed on Mars on 4 July 1997, having been launched from Earth on 4 December 1996. The craft was intended for a mission lasting 7 sols (7 days), but lasted 83 sols (85 days) before finally losing connection on 27 September 1997. Sojourner remains on Mars, albeit currently inactive and most likely can no longer move due to its exhaustion in power supply.

The Sojourner Mars Rover has come out in the following versions: 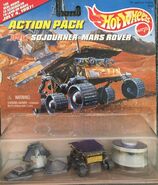