SpecTyte's design was originally begun by Eric Tscherne. Mark Jones completed the vehicle after Tscherne left the company. Much of the Teku vehicle graphics and logo / team design elements were designed by Jerry Thienprasiddhi. In the AcceleRacers series, SpecTyte was driven by Teku's Nolo Pasaro after Synkro was dismantled in the Metro realm. The car tops at 263 mph with its fuel cell powered 430hp fuel cell powered V6 engine, augmented by a 48V electric motor. It can also use a momentary 1000HP boost for extreme situations. This car has a carbon fiber monocoque with a blue neon underglow. The exhaust pipes exit out the sides of the car, with intakes at the top. Tweeters are mounted in side pods, which are usually on f1 cars for added fuel space and aerodynamic efficiency. There is also a subwoofer in the two-seater cockpit. It has Nitrox-2 boosters. The casting for the SpecTyte was updated in the later half of 2016, where the spoiler of the SpecTyte was no longer a separate piece and is now part of the body.

The SpecTyte has been released in the following versions:

As in Hot Wheels:beat that! 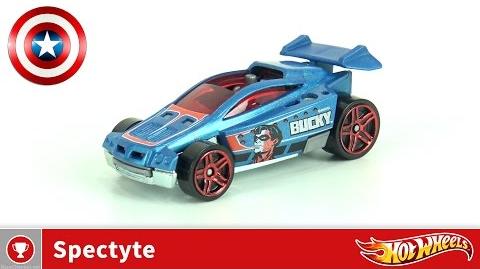 SpecTyte in Hot Wheels Race Off for IOS/Android 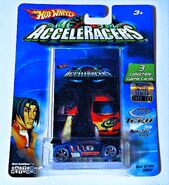