Spectraflame is the name used by Mattel for the metallic finishes sported by their original "Hot Wheels" cars in 1968 through 1972 and also on Super Treasure Hunts. The finish was not the standard paint used on normal cars, but rather a transparent lacquer applied over a polished zinc plated casting.  This resulted in a surprisingly realistic metallic effect, similar to the appearance of real cars. In 1955, Mel Pinoli laid what is known as the first Candy Apple paint job. The car was a 1950 Chevrolet belonging to Ted Leventhal.

In 1973, due to the study of lead in paint and its effects on humans, the original Spectraflame (candy-apple paint) was banned from manufacturing. The original Spectraflame was retired and replaced by a metallic enamel.  More recently, Mattel began using a new paint process for their special edition cars.  While it is not the same candy-apple paint, they continue to use the trademark Spectraflame to identify it.  The new manufacturing process involves a shiny vacuum-metalized finish covered in a semi-transparent, water-based lacquer.  This may change in the future due to the expense of vacuum metalizing the cars.  An alternate method involves coating the cars with a metal liquid and then applying a pigmented translucent paint.

Most of the Spectraflame color names are self-explanatory, but a few are counter-intuitive.  Antifreeze was described as a "lime green" color in addition to the later color that was also designated Lime Green.  There was also a light pink color named Lavender whose name was later changed to Salmon.

The colors would evolve as the toy line continued.  This may be due to different manufacturers or changes in the paint mix.  It can be demonstrated that the early colors from 1968-69 are significantly different from releases seen in 1970-72.  By this point, later colors were being introduced and some were no longer being used at all.  As a result, there are castings that are nearly impossible to find in specific colors.  Examples of these are the 1968 Custom Camaro in Magenta, or the 1971 Evil Weevil in Hot Pink. 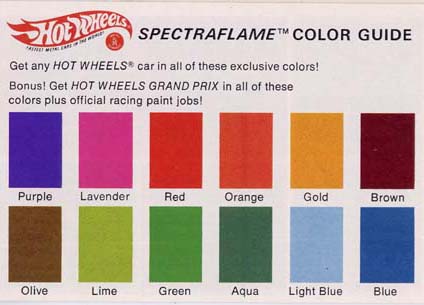 Watermelon-- One tough color to capture in a photo. this is close.

Blue
Add a photo to this gallery
Retrieved from "https://hotwheels.fandom.com/wiki/Spectraflame?oldid=223270"
Community content is available under CC-BY-SA unless otherwise noted.