The Splittin' Image is a Hot Wheels casting which debuted the 1969 Hot Wheels line-up. The car has two separate cockpits and a large engine with two exhaust pipes running down the length of the car between the cockpits.

It's original version was one of four 'Original Designs' which debuted in 1969 in various Spectraflame colors. It featured ribs on the glass and either a cream, light gold or dark brown interior. It was only manufactured in the USA and was packaged with a metal 'Collector's Button'. Some cars also had silver painted headlights, these were found on cars painted Spectraflame Antifreeze, Lime, Orange, Green, Lavender, Brown, Purple and Olive and are much harder to find than the regular versions. The Spectraflame version was produced until 1971 making it one of the most common redline cars.

1973 saw the Splittin' Image released as a Shell Promo, a giveaway promotional car handed out to customers at Shell service stations. As with other 1973 cars, it lost its Spectraflame paint which was replaced with enamel paint. To save on cost, the interior was removed and the glass was changed to an opaque black.

In 1993 it was retooled and used for the 25th Anniversary Series and featured replica 'Redline' wheels and various metallic paint colors which was meant to represent the Spectraflame paint of the original versions. It was released again similarly in the Vintage Series the following year and has been released several times since.

In 2002 a different, more detailed, casting with opening canopies was created for the collector-aimed 100% Hot Wheels line in the Splittin' Images 2-Car Set. This version was only released once before being discontinued.

Born: 1969
Birthplace: El Segundo, California, USA
Designer: Hot Wheels®
Specialty: With a dual canopy and dual exhaust, this speedster will split the competition in half! 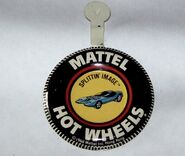