In 2002, 100% Hot Wheels re-released its classic Splittin' Image with a brand new detailed casting and created a new, modern version. This was the only release of these two castings. 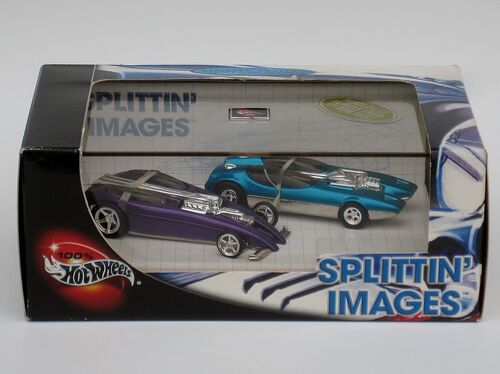 Recently several auto makers have successfully produced updated versions of older models. 100% Hot Wheels is out to prove that we can 'go retro' with the best of them with our Splittin' Images set. Splittin' Image was a concept car designed in 1969 by Ira Gilford, the same year his Twinmill debuted. With its futurist styling, twin cockpit canopies and exposed engine, Splittin' Image has been a collector favorite spanning five decades. The vehicle was the perfect choice to be brought into the 21st century with a refined and updated design and emblazoned with a special paint color. It's the way we have updated its 'Image'.

The following vehicles were included in the 2002 Splittin' Images 2-Car Set:

Box Rear
Add a photo to this gallery
Retrieved from "https://hotwheels.fandom.com/wiki/Splittin%27_Images_2-Car_Set?oldid=344293"
Community content is available under CC-BY-SA unless otherwise noted.