Stingrod is looseley based on a Pontiac Fiero.The Sting Rod has also been released under the name of Ammo, in 1993, for the Tattoo Machines series.

The Sting Rod has come out in the following versions:

The Sting Rod has come out retirement in the following versions:

Sting Rod look-a-like as seen in Hot Wheels Stunt Track Driver 2. (Same as the 1996 release except that the body paint was slightly green instead of gray) 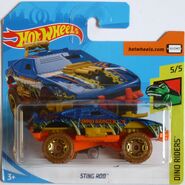 2019 Treasure Hunt Version
Add a photo to this gallery
Retrieved from "https://hotwheels.fandom.com/wiki/Sting_Rod?oldid=344014"
Community content is available under CC-BY-SA unless otherwise noted.