The Super Tuned has appeared in a multitude of Hot Wheels games.

The Super Tuned has been released in the following versions:

A picture in the gallery that details a cheat code for how to unlock the Smash Mouth version of this truck and the ZED 36 version of Sling Shot in the PlayStation 2 version of the Hot Wheels World Race game.

Atomix version next to 1:64 scale version. 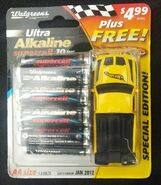 2005 Walgreens in pkg
Add a photo to this gallery

Retrieved from "https://hotwheels.fandom.com/wiki/Super_Tuned?oldid=381611"
Community content is available under CC-BY-SA unless otherwise noted.