This heavily modified surfer two-door woodie station wagon has a blown engine and sidepipes. A surfboard is attached to the sunroof up top, as well as a spare tire at the back. This casting has a vague resemblance to the Purple Passion Woody, but is a 'tooned (as in cartooned) casting. From the front end and side design, this casting has a fairly strong resemblance to the Ford wagons of the late 1940s and early 1950s. Note the little guitar on its backseat.

The Surf 'N Turf has come out in the following 1/64 scale versions:

Born: 2017
Birthplace: El Segundo
Designer: Hot Wheels®
Specialty: Surf's super high, board's waxed and your ride is totally tuned to the max, dude! With its massive engine mounted on the front, surfboard rack on the roof, the Surf 'n Turf™ is bound to make some waves wherever the swells take it. 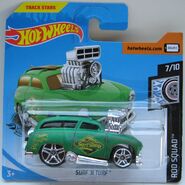 Retrieved from "https://hotwheels.fandom.com/wiki/Surf_%27N_Turf?oldid=327576"
Community content is available under CC-BY-SA unless otherwise noted.