The Sweet 16 II is a futuristic car with an elongated engine in the front, with 16 exposed exhaust pipes, hence the name "Sweet 16 II". The name is also a descendant of "Sweet 16", which was a model of an old car with an exposed engine, also with 16 tailpipes. This car was released in 1973.

Sweet 16 II has been released in the following versions: 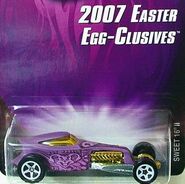