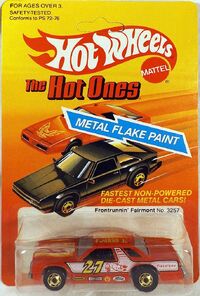 The Hot Ones History

Introduced in 1981 with a wheel no one had ever seen on a Hot Wheel. Up until this time they had always been a Cragar style wheel. This new concept also had a thinner axle bringing back some of that lost speed that had made Hot Wheels famous. The first castings released in 1981 were on a regular blister either with or without "The Hot Ones" printed in a "ka-pow" caption." The card would change to show off this new style with a completely new blisterpack. 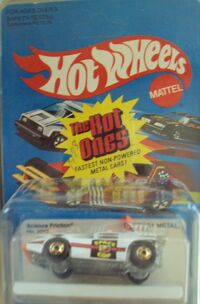 This was the first new wheel style to be seen on all four wheels of a car. This wheel was just called "Hot Ones" or "HO" for many years to come, until Mattel shipped out a limited number of cars with Silver Foil (SHO) on them. This necessitated the change from "Hot Ones" to "Gold Hot Ones" (GHO).

Although many collectors books and guides slate many of the first cars as 1982 releases, they were released in 1981. An example is Science Friction.

This may not be true for all the original released castings; without blisterpack it is impossible to tell. This was at a time that Mattel was bringing the Malaysia plant on line to start producing Hot Wheels in 1982.

I believe this and other new ideas came from Bob Rosas.

Yes, it did, we did a enormous amount of testing to get a wheel and a thinner axle to reduce friction.  Only then could we make the claim "Fastest Non-Powered Metal Cars."

These Hot Ones vehicles have come out in the following 1/64 scale versions:

Retrieved from "https://hotwheels.fandom.com/wiki/The_Hot_Ones_(1981)?oldid=286783"
Community content is available under CC-BY-SA unless otherwise noted.