The Nash Metropolitan was an Anglo-American subcompact two-seat automobile produced by Austin in the United Kingdom and marketed by Nash, Hudson and AMC in the United States from 1953 to 1961. The car was designed by William Flajole as an economical transportation alternative during a time when most automakers were sticking to a "bigger is better" philosophy. Even back then, the car was variously categorized as either an economy car or a subcompact vehicle.

This casting replicates a highly customized Nash Metropolitan done by Greg Salzillo and Dave Ford, named the Nashole; any references to that name are removed on this model likely due to the name sounding like a rather crude expression. The Nashole was the winner of the 2019 Hot Wheels Legends Tour.

The car was made available in the game Forza Horizon 4 as paid downloadable content on 22 February 2021. OEM, the car in-game handles rather poorly due to the thin rear wheels combined with the high torque of the engine.

The Nash has come out in the following 1/64 scale versions: 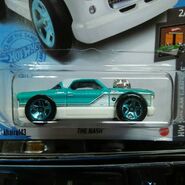 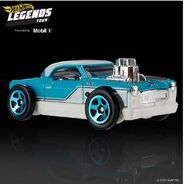 2021
Community content is available under CC-BY-SA unless otherwise noted.
Advertisement