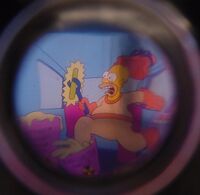 The Simpsons was a subset series, introduced in 1990, and was not part of the regular line-up. Issued on a over-sized card, the vehicle was in 1/64 scale. The card featured Bart Simpson looking into the scene machine portion of

the vehicle saying "LOOK INSIDE 'N' CHECK OUT THE VIEW, MAN!"  The card was the shape of Bart's head on the right side and bottom.

This was a new Scene Machines. With each wheel color representing a different scene inside.

Note: All were issued with white interior and clear glass.

The Family Camper vehicle has come out in the following 1/64 scale versions:

Note: All had clear windows and white interior.

The Homer's Nuclear Waste Van vehicle has come out in the following 1/64 scale versions: