The Hot Wheels Top Speed was a line of futuristic, all plastic vehicles introduced in 1995 and were dubbed the 'most advanced vehicles in Hot Wheels History!' as advertised on the packaging.

8 unique castings were issued exclusively for Top Speed and all featured a small metal hook on the bottom which could be hooked into a special launcher which was also exclusive to the series. A sub-series called 'NEW Solar Flares Vehicles" featured two castings that were exclusive to the 'Solar Flares' series while the other six vehicles could be found in both the Solar Flares sub-series and the regular series. The cars had a chassis bar on the base which could be moved forward for 'drag racing action' and back for 'loops, curves and pipes', this restricted the pivoting body. The cars did not have the name on the base but the names could be found on the rear of the packaging. They were advertised as having 'Co-Molded Wheels', 'Floating Front Axle' and a 'Ploy-Carb Body'. Each model came in two 'computer-age' color schemes which featured a transparent body, chrome interior and engine piece, brightly colored base, bright tampos and either Hot Hubs or Progressive Oval Wheels. The Solar Flares vehicles came with a tinted chrome interior and clear outer portion of the wheels.

The cars could only be purchased in packs of two or included in playsets. The two-packs also included a 'Catapult Launcher' and 'Accelerator Tube' of which regular orange track pieces could be connected to. The launcher was to be clipped onto the Accelerator Tube by folding down each end cap of the tube and sliding the launcher onto the end cap ribs. The car was to be placed on the launcher wheels down where the chassis hook drops down freely and the hooked placed into the slot closest to the end of the tube and pulled back until the launcher 'CLICKS' and the starter tab pops out. Press the tab and the car catapults forward at 'incredible speed'.

Two playsets were released. The 'Ultra Pipe Fight' and the 'Triple Threat'.

The Corkscrew has techno-flexion handling suspension, XT turbo cradle engine, long chain inorganic resin body and synchro-mold style wheels. It's exo-shell rotates on a median axis to shoot tubes, hug hairpins and power around pipes like no other vehicle.

The Back Burner has twist-tech T-bar axles, a hyper-torque jet propulsion engine, lightweight synth-alloy body and wind-shearing hubs and rims. It is fitted with a turbine tail fan that propels this wild thing on wheels like a torpedo around loops and inverted curves.

The Bi-Sectors axles have bi-lateral hydro pneumatic arms and its wheels are TURBO GLO drag mags.It has a harmonically balanced engine block and a Solar Flare finish ultra-plez body. It is computer-designed with a mezzo-axial split to haul bumper over a helical track and hug the tightest hairpin tubes.

Cryo Pump & Back Burner packaged in a 'Solar Flares' 2 Pack 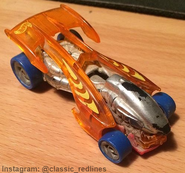 Add a photo to this gallery
Retrieved from "https://hotwheels.fandom.com/wiki/Top_Speed?oldid=292992"
Community content is available under CC-BY-SA unless otherwise noted.