Mattel introduced the Tough Customer in 1975. This was the first year military vehicles were released. The early version is the only tank to have the name cast into the base "Tough Customer". It is based on the M60A1 Main Battle Tank.

"Can you name 6 Redline Hot wheels that never had redlines? This is one. Two are the same cast with different names.and the other two are released the same year as the Tough Customer. Last one is a year later."

Tough Customer has come out in the following versions: 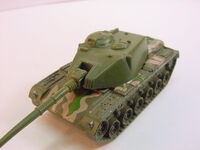 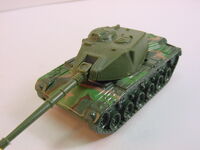 Add a photo to this gallery
Retrieved from "https://hotwheels.fandom.com/wiki/Tough_Customer?oldid=303484"
Community content is available under CC-BY-SA unless otherwise noted.